The Virgin appeared at an Aztec sacred site.

Even unreligious people acknowledge her presence. 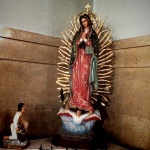 She is the unifying identity for all Mexicans.

A hint of incense, with its sweet scent of mystery and sanctity, hung in the air of the semi-dark church.  Several hundred Mexican immigrants and a few Anglos filled the pews and more stood along the walls.  On a table beneath the rood beam, twinkling lights surrounded the statue of a woman  wearing a blue cloak with stars; her tranquil, brown face is turned aside, as if watching the boys at her feet, dressed in white ‘campesino‘ garb, and little girls with braids and long skirts, singing Spanish carols.  Happy parents watch, pleased they are passing their culture to the next generation.

It’s December 11, 10:30 p.m. and, to the sound of guitar music, the crucifer, the thurifer, the acolytes, the priest, and then the bishop walk up the center aisle to the sanctuary.  This is my church, El  Santo Nino Jesus, in Saint Paul, Minnesota, and as a new member, and this is my first experience with the Feast of Our Lady of Guadalupe.  And it has changed my perspective.

If you’re not a Mexican, you may find the rest of this post exotic, but stick with me.  And if you are Mexican, I hope I don’t give offense if I get this wrong.  Believing in the Virgin of Guadalupe goes to the heart of cultural differences between Mexican and North American spirituality.  My friends in Mexico and Minnesota believe so strongly in her existence and power I can’t dismiss it as unreal.  Believing in Guadalupe is a part of who they are, and a part of our friends.  Something I accept even if I don’t  understand it completely.

I grew up with the Virgin Mary as a figure from the Christmas Gospels, in Christmas pageants, carols, and creches. She seems so remote, so unnaturally pure as to be unreal.  I thought of her as the greatest of saints, the “Mother of God,” but abstractly as the name of a holy person along with Peter and Paul, Luke and Matthew.  Like them, she lived in a distant past and wasn’t a presence in the here and now.   That’s how I thought until I went to Mexico where she seems to be a fact of life.

So who is she?  What is my relationship to her – whoever she is?  Indisputable information about the Virgin of Guadalupe is hard to come by.  What there is, is subject to varied interpretations and disputes.  As the story goes, she appeared to an indigenous peasant named Juan Diego a decade after the Spanish conquista on the hilltop of Tepeyac, a place where the Aztecs had worshipped Tonanzintla, the mother of their gods.  The Virgin appeared with a brown face and spoke in Nahuatl, the indigenous tongue.  The Aztecs quickly embraced her and millions converted to Catholicism within a decade, despite the doubts of the bishop.  In time, the Church accepted the apparition as real and built a church on the site.  It is now the most visited shrine in Mexico.  December 12 is her feast day in the Mexican calendar.

I’ve never seen an apparition or met anyone who has, but I image it is intensely personal and makes a powerful impact on the person who has it.  But is it real?  Or is it a form of dreaming or hallucination or delusion?  For the millions who didn’t witness the apparition, the story of it rang true and they converted because of it.  A  woman, the Mother of God, like their Aztec mother of the gods, had appeared where they used to worship.  The effect was profound.

She was and remains a figure for all Mexicans.  When Padre Miguel Hidalgo raised the flag of Independence in 1810, he and his followers shouted: “Long live our Holy Mother the Virgin of Guadalupe, Death to bad government!”  Painting her image on their banners, the army of peasants and creoles fought and died by the thousands until Mexico achieved its independence in 1821.  Afterward, the victors gave thanks for Guadalupe’s intercessions as the source of their victory.  After a century of Independence, internal struggles, and dictatorship, Mexico erupted in Revolution.  The leaders had no consensus: Liberalism, monarchism, socialism, constitutionalism, and they led the country in different directions. Emiliano Zapata led his followers into battle under the banner of Guadalupe.  In 1995, the Zapatista Liberation Army of Chiapas named their ‘mobile city’ after Guadalupe. For a century, through good times and bad, the Virgin has been the unifying symbol, the rubber band, that binds together the disparate classes, ethnicities, political parties, and alliances that make up modern Mexico.   Unlike politicians, she is above criticism or doubt.

Everywhere I go in Mexico, Guadalupe looks upon me from posters, banners, and statues in store windows.  Men and women wear her medallions; she is silk-screened onto T-shirts, and painted onto walls.  Restaurants and businesses display posters or images of her.   Pedestrians pause at small shrines on the sidewalk to pray before going to work.  Like a truly protective mother, she is a silent presence watching over her ‘children’ in Mexico.  Guadalupe is syncretistic but there is substance as well.  The Biblical Mary was a decisive and powerful figure and not a passive vessel of popular piety.  Being pregnant out-of-wedlock in Judea would have brought about Mary’s death by stoning (had not Joseph agreed to marry her).  The “Magnificat” by itself is a  radical vision of social justice (as yet unrealized) that Jesus went on to proclaim as ‘good news.’  After giving birth, Mary  is a silent presence except at a wedding in Cana; a witness to the crucifixion and resurrection.

But all this is history and theology.  The facts are few and conjectural.  Whether Mary is a real figure in history, or whether Mary’s apparition as Guadalupe happened or not; the impact on Mexico and Mexicans is real and profound and can’t be ignored when learning to understand Mexican culture.

I was struck by Guadalupe’s power, if that’s what it is, on the day we installed her statue in the chapel at Santo Nino.  Someone donated the statue anonymously (anonymous donations are very Mexican).  Two women carried her statue forward and put it on a corner of the altar.  The priest blessed it with incense and holy water.  And, as the soloist sing “Ave Maria,” the women carried the statue to its place in the chapel.  I stood with my friends during the installation, seeing solemn, brown faces – men’s and women’s – wet with tears.  Their connection was deep, personal, and emotional; and I knew it was something outside my ability to experience.

Every Sunday, Angeles or other women from Santo Nino place fresh flowers before Guadalupe’s statue.  They place the flowers carefully, tenderly, and then stand back, offering prayers.  Looking on, I see their devotions are intimately personal, the silent or whispered conversations from their hearts between the women and Guadalupe.

Why do modern people – Mexicans or North Americans – believe in an apparition that happened nearly 500 years ago, if it happened at all?  Why do they believe in an apparition in which Mary returns as an indigenous woman?  Almost any other appearance would be treated like believing in UFO abdunctions, Big Foot sightings, or extra terrestrial origins of the pyramids.  Where’s the proof?

Those questions lead me to wonder about some sacred North American beliefs.  Why do we believe the “invisible hand” of the free market brings about the greatest good for the greatest number when the evidence is contrary?  And why do we still pay lip service if not outright devotion to the idea that “heaven” has a special mission, a “manifest destiny,” for the United States in world affairs not given to any other nation?  Why do we believe that?  It takes a large dose of hubris to believe in manifest destiny or American exceptionalism, and a certain moral blindness to believe in the goodness of the free market despite economic facts.  The free market and manifest destiny are abstract ideas but we accept them.  It’s even easier to believe in Guadalupe.

The Virgin of Guadalupe is a real and powerful force in Mexican life.  Millions ask her to pray with them and for them; they seek her blessing, protection, and guidance in all manner of causes and situations.  When their prayers are answered (and I believe some prayers are answered), or they receive a miracle, they gratefully undertake works of mercy, compassion, and charity.   I can’t think of many individuals (real or imaginary) who have inspired and commanded such devotion over so long a time.

Guadalupe wasn’t part of my spiritual formation in Minnesota.  I didn’t grow up with her watching over me from a wall in my home, in my church, or from a street corner shrine.  She didn’t exist in my world until middle-age and I find it impossible to make an emotional connection to her the way that “Amazing Grace” or other hymns give me a clutch in my throat.  Guadalupe for my friends and “Amazing Grace” for me have been indelible parts of our respective spiritual lives.  Memory is a part of our identity.

“What does the Virgin of Guadalupe mean to you?” I asked my friend, Maria, a woman of forty, a mother, and bookkeeper.

Yes, now I understand.  Jesus taught that when we feed and clothe the poor, or heal the sick, or visit the prisoners, we are doing these things to him as well.   And from that, we are taught to seek the face of Jesus in the people around us or to be his face to others.  Seeing Guadalupe as the feminine face of God makes sense.

Tonight we will celebrate the Feast of Our Lady of Guadalupe.  I’ll be there as the music swells, the priest and bishop elevate the bread and wine in the Eucharist.  I’ll be in line with the others, filing forward  to receive the Body and Blood of Christ.  And then I’ll pause before the Virgin’s statue to say a prayer.  After the communion, the Aztec dancers will file in, their feathered headdresses waving, the shells tied to their ankles rattling softly.  While the drummers pound a hypnotic rhythm, the dancers will sway and dip before the statue, their bare feet flashing and the shells rattling.

And after the dancers, the mariachi, six men in tight pants and short jackets adorned with silver conchos and buttons.  They will stand before the statue with guitars, violin, and trumpets to play and sing “Las Mananitas,” a traditional song for birthdays.  We will stand and sing with them as the last of the incense drifts over us and the music fills us with the joy of celebrating the day of our spiritual mother, the Virgin of Guadalupe, the feminine face of God.

One thought on “The Virgin of Guadalupe – God’s feminine face”