Speaking and reading another language opened doors into the lives of other people. Spanish helped me make friends I wouldn’t have otherwise. And, through friendships, I gained greater cultural awareness of Mexico. Greater awareness usually brings clarity but clarity reveals things sometimes touch my conscience in unexpected and uncomfortable ways. With awareness I also  feel some pain.

This happened gain last Saturday in Oaxaca, Mexico. This sunny, colonial city depends on tourists whose commerce with indigenous artisans and traditions accounts for nearly a third of the local economy. As la Semana Santa (Holy Week) approaches, more tourists arrive from Mexico, the United States, and Europe seeking a festive vacation. 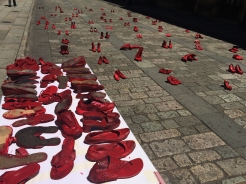 Walking along the Alcala, Oaxaca’s street of high-end shops and tony restaurants, I’m surprised to see dozens of shoes, each the color of blood, set out in pairs on the gray cobbles. What is this, I wondered as I joined the cluster of Mexicans around the informational banner.

Zapatos Rojos (Red Shoes) is public art dedicated to women who have suffered violence. It began in 2009 as a symbolic march seeking justice for 33 women who were killed or ‘disappeared’ in Ciudad de Juárez. Now it is a traveling presentation, a call to conscience in solidarity with all women who risk violence at the hands of men who are protected by custom and official indifference. 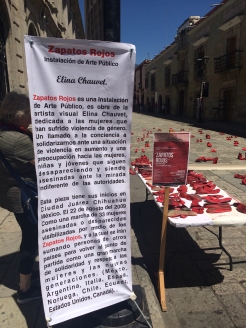 Tourists passed the exhibition, most of them glanced at the crimson shoes, but few stopped to read the banner before they entered the shops and restaurants. Nevertheless, the silent, empty red shoes screamed to those of us who read the banner.

The price for learning another language, another culture, includes knowledge of good and evil. Like it or not, reading about the horrific murders of women is now an integral part of my Mexican  reality. I can no longer say: ‘I didn’t know.’ Now I know, and now my conscience isn’t as clear as it was before I saw the shoes. How bad is violence against women in Mexico, I wondered?

Minutes later, I had an answer to my question when I came upon a group of women speaking in the shade of Oaxaca’s cathedral. Behind them, large banners bore the photos and stories of their daughters—promising young women— who disappeared or were killed. The speakers were part of 300 Madres A.C. Unión de mujeres victimas de la violencia en Oaxaca. Our small crowd of listeners included young Mexican couples with babies, middle-aged women, youths, two policemen, and me—the only non-Mexican. 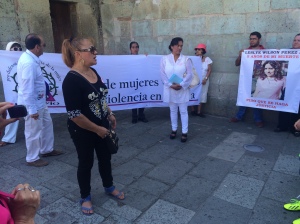 The women’s emotions drove their stories of pain and loss. Now and then, each paused to wipe her eyes or regain her voice. Their words flashed like sharp knives, paring away the hypocrisy of police and public officials who told them not to worry, their daughters were probably off with their boyfriends. Or worse, officials told them the girl was probably a prostitute or drug addict—as if that justified their deaths. One by one, the mothers demanded an end to ‘la cultura machista’ that protects the men—including police—who treat women as less than human.

How bad is it, I wondered?  It’s bad—it’s staggering. In the State of Oaxaca (population 3.5 million), 559 women were murdered between 2010 and 2015. Another 25 were murdered in January-February 2016. According to the Mexican Institute for Women (2009), 67 percent of Mexican women over the age of 15 years experienced some type of violence. In 40 percent of the cases, the violence occurred in the woman’s home, and usually involved a current partner or ex-partner.

What accounts for these horrors? Beneath the colorful cultural images projected by Mexican tourist bureaus lies a dark, authoritarian legacy of traditionally narrow gender roles, an acceptance of violence, and an absence of political will or resources to investigate and bring assailants to justice. These women, like many others, can’t rely on the government to protect them so they are organizing in their communities to stop gender-based violence.

The Nobel Women’s Initiative and Just Associates (JASS) documented (2012) that government officials and security forces frequently used sexualized violence to intimidate and subdue women. In 2006, when President Enrique Peña Nieto was Governor of the State of Mexico, he sent security forces to crush a protest against a new airport. Two protesters died and 26 women were sexually assaulted by the security forces. To date, no police officer has been  found guilty of the assaults. Peña Nieto later justified the violence as necessary to restore public order. 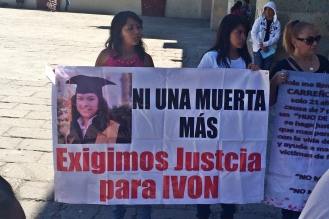 Nor can women rely on the authorities to protect them from drug cartels that coerce women into transporting drugs and filling logistical roles. According to a former director of the National Women’s Institute (Mexico City), cartels force women into prostitution because the sex trade is the third most profitable market after drugs and small arms.

Can this be true? Sadly, it is. It is a dark aspect of the Mexico I love.

These questions led me to look for comparable incidents in the U.S. and Minnesota. Femicide or feminicide has its evil counterpart in the U.S. One U.S. woman is assaulted every nine seconds; at least three U.S. women are murdered daily by their husbands or boyfriends. Domestic violence is the leading cause of injury to women—more than car accidents, muggings, and rapes combined. Ten million children witness domestic violence annually. Nearly one in five teenage girls said a boyfriend threatened her if they broke up. Women between the ages of 18-24 are most commonly abused by an intimate partner and this accounts for 15 percent of violent crimes. Nearly three-fourths of all murder-suicides involve an intimate partner and 94 percent of the victims are female (data from the National Coalition Against Domestic Violence).

In Minnesota (population 5.2 million), at least 115 women were killed in domestic violence between 2010 and 2015—34 of them in 2015. In the majority of cases, the women were murdered when they tried to leave an abusive relationship (data from Minnesota Coalition for Battered Women). This is significant.

Within my adult memory, there was a time when the police rarely intervened in ‘domestic violence’ except when the neighbors complained of the noise. Police seldom arrested anyone—particularly men. Women feared retribution and were afraid to press charges. Twenty years ago, the public regarded domestic fights as private affairs. When women did complain of abuse, the courts, the police, and even the clergy were quick to ask the woman what she had done to provoke the attack! They even advised her to be more understanding and work it out with her spouse. I’m struck by the similarities in the cultural mentalities of Mexico and the U.S.

I stood in the cathedral’s shade for nearly and hour and listened to the women tell their stories. As a husband and father of two daughters, I felt compelled to stay because, if I walked away and ignored the evil, I would thereby condone it and participate in it. As a foreigner, the only help I can give these women is to be present in the moment, listen to their stories, and let the stories touch my conscience. Listening is a form of participation, listening seems so insignificant, but in fact it’s an act of political and moral solidarity.

I returned to the shoes on the cobbles after the women finished speaking. The woman curating the Zapatos Rojos exhibit approached me with a slip of paper and a pen.

“Quiere escribir un mensaje?” Do I want to write a message?” she asked.

Yes. Until now, la cultura machista and its violence seemed like abstract information unconnected to my reality. I hadn’t encountered anyone who had suffered violence. Now that I’m a seasonal resident in Oaxaca, I know the violence is part of the society I meet in the streets, it’s a reality for the women who sell me tomatoes in the Mercado Merced, it’s an integral but evil part of the Mexico I love. The dozens of empty shoes eloquently call me to think of the dead or ‘disappeared’ women who live only in the hearts of their mourners.

Then I thought of my friend Rosario in Puebla. A year ago she posted information on Facebook about Guadalupe, her friend who vanished after work one afternoon. Guadalupe or her remains haven’t been found. Nothing more is known—only silence.

I took the paper and pen she offered, certain Rosario would leave a note were she here. But she isn’t and I will do it for her. No one can bring Lupe back from the dead but I could take Rosario’s place and stand with the brave women of Mexico who confront violence and official indifference. I wrote a note—a kind of prayer—to Guadalupe and stuck it in a shoe. 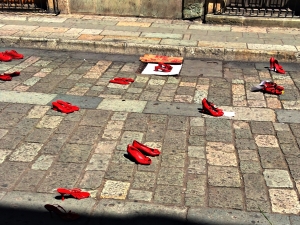 It is often said that travel and a second language broaden one’s perspective. And this is true. Once we gain another language, and our cultural horizons widen, we are vulnerable to the moral questions once invisible to us. The violence against women, like the sexual abuse of children, becomes culturally pervasive when society turns a blind eye and says it’s a private matter. I can no longer say I didn’t know, and silence in the face of evil isn’t a moral option.

Violence against women isn’t news to Mexicans; the news is that women will take physical risks to end la cultura machista. Zapatos Rojos is a fight for human rights, social equality, individual dignity and civic justice. The empty red shoes on the cobbled street remind me that moral obligations transcend national and cultural boundaries.