Popocatepetl – ever ready to erupt

A boy dressed as a guerrero for the day.

The causes of the 1910 Revolution resonate today. 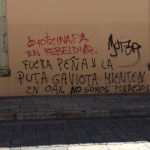 Graffiti against the President and his wife.

Understanding social realities is an important part of learning Spanish and Mexican culture.  Unlike a packaged tour, immersion means you take what comes, the good, the bad, and reality  Today is the 104th anniversary of the Mexican Revolution.  Although it began as a Revolution, it soon descended into civil war lasting nearly ten years.  Its grim tally of untold deaths is often overlooked in favor of colorful characters like Pancho Villa and Emiliano Zapata.  Let’s start the day’s meditaton with the colorful leaders and look at the realities later.

My friend Don Hilario, a former mariachi, took me to several places in the life of an iconic Revolucionario: Emiliano Zapata, the handsome general with a thick moustache, large sombrero, his chest crossed by bandeliers of bullets.  Don Hilario’s adult children and grandchildren – my friends – live in Minnesota.  He lives in Cuautla, Morelos, in a small house built against the stone and concrete wall of the ex-Hacienda Coahuixtla.

On my first visit in 2010, he put on his hat, picked up his cane, and led me into the ex-Hacienda.  It is a ruin, an empty shell of crumbling, stone buildings were landless peasants processed cane into sugar and died in dire poverty.  The Revolution smashed the hacienda system, including this one.  As we stood on a knoll, he pointed across the valley and said: “Over there is Zapata’s house.  Do you want to see it?”  Of course I did!

It’s the centerpiece at the Zapata Museum in the town of Anenecuilco (which he made me practice pronouncing).  The remnants of its adobe walls are protected from the weather by a huge nylon cover.  The immense mural presents the life of Emiliano Zapata in dramatic scenes and vivid color.  Zapta is the Revolution’s romantic icon.

When I visited him again in 2012, Don Hilario drove me to his home town, Quilamula, a pueblo in southwestern Morelos.  On the way, we stopped at ex-Hacienda Chinameca where a young teamster named Emiliano Zapata hauled the bricks to construct the hacienda.   In 1919, near the end of the civil war, Zapata’s rivals assassinated him there.   Quilamula is a poor town, and it was easy to imagine that many towns like it offered men as “guerreros” who followed Zapata for “Tierra y libertad,” land and liberty.

That night, in my guest room on the second level of Don Hilario’s small house, I stood on the balcony under a full moon.  Looking over the tops of the pomelo trees at moonlight and shadow, I was deeply aware I was as close as I could come to the Revolution of 1910.

This morning I paused by the plaza of a kindergarten and peered through the wrought iron gate at the parents and children celebrating the Revolution.  Little boys wore small serapes, conical sombreros, and carried toy rifles; the girls wore long skirts with ribbons in their braids.  A fiesta for los “ninos.”

But an adult hung on the gate a framed, hand-lettered sign listing the causes of the Revolution:

Many Mexicans today wonder what has changed.  Is this 1910 over again?

Since the Spanish conquista, resources and wealth in Mexico have been largely in the hands of a small circle of influentials: Spaniards, then the criollos who succeeded them, and then the one-party government of the PRI (Partido Revolutionario Institutional) that ran Mexico from 1929 until 2000.

Expropriation of ancestral lands provided the spark for Zapata’s bottom-up revolt in the State of Morelos.  But Zapta’s was only one of several revolutions that erupted in different places in opposition to the 30-year presidency of  Porfirio Diaz.  Briefly united, the revolutionaries forced Diaz into exile.  After that, the country plunged into a decade of brutal conflict as generals and chiefs allied and betrayed each other in pursuit of conflicting agendas for the future of Mexico.

Unfortunately, ten years of civil war didn’t resolve these contradictions and establish a common vision that all Mexicans could embrace.  Nor did it create a democracy to off-set if not end the pre-Revolution system of oligarcy that had marginalized the campesinos and indigenous.  Only the names of the oligarchs changed.  The tendency toward oligarchy re-emerged within the state managed-economy run by the PRI.  Before its 71 year domination ended, the PRI co-opted and absorbed civic organizations, labor unions, trade associations, and cooperatives that might otherwise act as independent, countervailing forces.

Ayotzinapa – a flash back

The September 26, 2014, massacre of 43 student teachers at the hands of officials in Iguala, Guerrero, shocked a country already numbed by tens of thousands of deaths in a decade of the narco-violence.  Murders in Iguala resurrected memories of 1968 when he government used the Army to crush a student protest at the Autonomous University in Mexico City.  Like Kent State in 1970, the massacre at Tlatelolco left deep wounds.

The mayor of Iguala ordered the arrests of students because he feared they would disrupt an event held by his wife.  After the arrests, the police turned the students over to Guerreros Unidos, a drug gang, that killed them and burned their bodies.  Iguala exposed and confirmed the collaboration between drug cartels and local government.   Although the mayor of Iguala is in jail, and the Governor of Guerrero has resigned, the search for bodies goes on, and people wonder what other officials are controled by drug cartels.

Public anger is palpable, as is the disgust over corruption.  Daily press accounts reveal conflicts of interest and corruption among governors and other officials in cities and states throughout the country.  The President’s luxurious new home for his wife, however it is finally paid for, is more gas on the fire for citizens who don’t live in luxury.

Discontent and anger are evident in every place I’ve traveled -Mexico City, Puebla, Oaxaca, Tlaxiaco, and other pueblos.  Oaxaca’s Zocalo is a protesters’ camp of banners, tents and tarps.  Protesters march in Puebla and Mexico.  Banners hang in front of municipal halls and government buildings; graffiti and posters avow solidarity with the 43.  Youths slow traffic at toll booths outside Oaxaca to give travelers information and seek donations for families of the 43 dead students.

“Ya basta!” Enough already, is the prevailing mood.  Protesters are calling on the President to step down.

As I write this, officials in Mexico City have canceled the traditional celebrations in the Zocalo because of massive protests that are occuring.  Police and marchers are clashing near the International Airport.  In Puebla, students are marching in solidarity with the 43 murdered students.  Protests are occuring elsewhere.

After you make friends in Mexico, it becomes increasingly difficult to shrug your shoulders and feel nothing for the social and political forces affecting them.  Friendships can make these events personal.  What affects my friends, affects me, even if I can’t do anything about it.  For my many friends in Mexico, I hope for the best – whatever that may be.

After a decade of narco-violence and political corruption, will the Mexican people rise up in revolt?  No one can say for certain.  The Revolution remains unfinished, its promises unfulfilled.  The grievances of 1910 are with us yet.  Are there grievances enough to spark a national uprising?  No one knows for certain, but there is something in the wind.  And if there is an uprising, will it have a unifying vision for Mexico?  No one knows.

Like the volcano Popocatepetl, the body politic has errupted periodically since 1910, the outrage arising over one greivance or another, and then subsiding.  But like El Popo, the causes of unrest remain and the social magma is moving once more beneath the surface.  The phrase: “Ya basta!” has real force.  Mexico, like El Popo, is never dormant and the risk of eruption remains.  “Ya basta!”