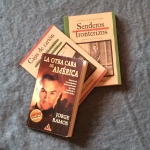 A landscape of ancient cultures

Humility is the avenue to self acceptance.

What is more exquisite than preparing for a trip? A week, maybe two, or even a month? Do you have a ritual you follow as you prepare? I do. Mine begins by ignoring the departure date until at least a month before I leave. Then I start. It’s a kind of foreplay. Something that builds to peak excitement on the day I leave.

Tonight, I’m making beef and black bean tacos, listening to cumbia on my laptop and, later, watch Treasure of the Sierra Madre, a great story about greed, generosity, and compassion starring Humphrey Bogart.  I’m only 36 hours away from departure. The SuperShuttle will pick me up at 4:40 a.m. for a 6:30 flight to Mexico City. Two hours after that, I will be among friends in Puebla.

Already, the suitcase is packed—37 pounds of necessities to last me three months. That includes a laptop, changes of clothing, notebooks for my writing, gifts that Mexican friends have asked me to deliver to their families, plus personal odds and ends. The beauty of is—I’ve make the trip many times and I don’t need to take much. A woman five houses from my quarters does laundry. I cook my breakfast and supper and, as much as possible, live as ordinary Mexicans do.

A flight from frigid Minnesota to semi-tropical Oaxaca crosses more borders than I can count. Physically crossing the Río Bravo is the least significant of many crossings. And the much-trumpeted Great Wall will be easily crossed, also.

The most significant borders are internal ones of language, cultural beliefs and habits, perspectives on the world, expectations, and attitudes. You don’t often think of these things in preparation, but they’re there. And if you’re an experienced traveler, especially a bilingual one, it doesn’t take you more than a few hours—maybe a day and a night—to easily reintegrate into your new surroundings.

That’s how long it takes my alternate persona to assert itself in Mexico. The shifts are subtle now, I don’t notice the change the way I did at first, but they are essential to living easily within the envelope of Mexican culture. Language is the first adjustment. After nine months of speaking English like a Minnesotan, my vowels are ‘flat’ and have lost some sharpness of the long Spanish A, E, I, O, and U. It takes a day to complete the crossing from Minnesota English to Mexican Spanish. But that’s only the beginning.

As the language shifts,  the muscles of my tongue resume familiar twists. It’s like riding a bike, the muscles relearn to shape the proper sounds, moving faster to dance over the vowels (vocales), each one a syllable. At the same time, my ear retunes its acuity to recognize rhythms and sounds uncommon in Minnesota except in bodegas and Latino neighborhoods. According to scientists, a second language creates a new set of circuitry in the brain. Well, it’s time to flip the switch!

The crossing won’t be complete until my alternate persona emerges; the me that expresses myself in Spanish with words and phrases that I might never say in English in Minnesota. One of the miracles of another language is the way it taps into the subconscious parts of you in ways the native tongue doesn’t. With any fluency at all, you make the shift without knowing it.

My biological family didn’t overuse words of emotion. We were WASP’s and emotions were considered one’s private business, not to be put on public display. As children, were expected to speak in facts, not emotions. I grew up and remain a largely pragmatic, and matter-of-fact in Minnesota . In Mexico, however, a culture where all aspects of life are expressed in emotions and opinions, that neglected side of my soul emerges. The inner life, not the outer, is more important in Mexico. I say things using Spanish words and phrases of emotion I hesitate to use in Minnesota. In el norte, my comments on someone’s difficulty is usually “It’s too bad that …” because it fits within the emotionally restrained culture of Minnesota’s north European population. But not in Mexico. There, I easily say, “Está triste que … or It’s sad that …”

Between the United States to Mexico lies a gulf of history that shapes their respective cultural mentalities. As Americans, we are data-driven, depend on strong (even dominant) institutions to provide stability and security. We can count things happening exactly when and how they’re supposed to. UPS gives a tracking number and delivery date, our appliance repairman gives us the hour when he’ll arrive, our employer automatically deducts our taxes and deposits our paycheck in the bank. These and a thousand other certainties fee our fantasy of the world as a secure orderly place.

Not so in Mexico. Try to make a date for coffee next week and the conversation starts with, “Es posible… It’s possible …”  Of course it’s possible! you think. Anything’s possible. So why not just say, ‘Yes’? Because, in Mexico, institutions are trusted less than in the U.S., people don’t depend on them, and experience has instilled an understanding that the best laid plans will come a cropper more often than not. Crossing over involves setting aside an expectation all will run on time, as planned. That doesn’t happen south of the border, and we all learn to live in the conditional tense.

The happy history of the United States during the 20th century instilled the fantasy of ‘progress’ as a reality in which each generation of Americans is richer and happier than the one before it. Unfortunately, the expectation has induced an unsustainable sense of entitlement that began crashing in the 2008 recession—if not sooner. Maybe Mexicans are wiser on this point. They hope tomorrow will be better than today but they don’t count on it. They’re students of their own history and know the bitterness of disasters—political, financial, social, and familial.

You ask: Why do I cross over each year and live in a society rived by narco-violence, social unrest, economic insecurity, political corruption, and widespread poverty? Aren’t there better places than this?

It depends on what you mean by ‘better.’ Certainly, the Mexican coasts with their lavish resorts in Cozumel, Cancun, and Cabo are ‘better’ in this respect. But in those places I won’t find or receive what I look for and find among ordinary Mexicans. Living much as they do, I experience intimately my own humility and feel gratitude for my life and its possibilities in ways that don’t happen when all is secure and orderly. The mass of Mexicans are living a line from the Eagles’ hit, Hotel California: ‘You can check out any time you want, but you can never leave.’ Crossing over lets me take their way of life as my own for a long as I can, and live it on their terms. Every time I do this, I reconnect with my deeper self, and rediscover aspects of my persona I have overlooked, neglected, or forgotten. Unlike my dearest Mexican friends, I can leave; there is an exquisite sadness in knowing they can’t. 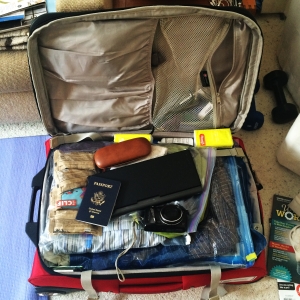 One suitcase of possibilities.

It’s deep January. Minnesota is locked in the coldest weather of the winter with the mercury at -21°F with a wind chill nearing -40°F. Snow squeals in protest under foot; darkness still falls too early and sleeps in too late. Upstairs in my study, a reddish suitcase lies open on the floor, half-packed. A  hopeful sign.

Packing  for travel is an art. What I take is less important than what I leave behind.

I’ll be in México for 10 weeks and I want to take only one suitcase, as small as possible. This one weighs only 33 pounds when packed and I’ll take only the things I’m certain to wear or use or use up. Everything must be versatile to meet changing weathers and social circumstances. I start in Puebla at 7,500 feet near the foot of El Popo where it’s cool, then to tropical Cuetzalán and Huehuetla near the Gulf Coast, and then to hotter, semi-arid mountain valleys of Oaxaca State. My packing list is shorter, now; past trips have showed me what I don’t need. No more packing this or that, “just in case.”

My packing list comes from the experience of previous trips—what I wore and didn’t wear, what conformed to the clothing Mexican men wear every day. My wardrobe is simple and chosen so I blend in as much as possible and avoid attracting attention.

I’m leaving behind things that mark me as an obvious foreigner: white athletic shoes, tee-shirts with company logos, charitable causes, favorite sport teams or U.S. national parks; no baggy shorts with cargo pockets or polyester hats with mesh ventilation and floppy brims. How I appear to Mexicans will affect how they interact with me. I want as few barriers or presumptions as possible.

The contents of my suitcase reflect my aspirations. Does yours?

What I take reflects what I want to do, and my ideas of the social reality I expect to encounter. I will visit my Mexican friends but spend most of my days teaching English in a small, indigenous town near Oaxaca. I don’t expect to have the same level of material comfort I enjoy at home and I won’t bring things to compensate for that. My measure of comfort is Mexican , not Minnesotan.

As I fold and pack my clothes, I am also packing my mind and heart. What aspirations and hopes will I take with me? And what expectations will I leave behind? I want to be emotionally and spiritually present every moment I’m in México, otherwise, why travel? Preparing my heart and mind is even more important than the clothing I choose.

My journeys are as much interior as they are geographical and, in the end I discover myself anew. Being present in the moment is the key.To stay present in the moment, I’m leaving behind my anxieties about two manuscripts awaiting the acceptance or rejection of an agent and an editor. These things are important to me but I can’t control the decisions and judgments of others. As Mexican friends tell me, these are in God’s hands and the results will be as they are meant to be. There is no value fretting about them in México and miss the moment.

Next to my worry and preoccupations, I leave behind the credentials of my public identity in Minnesota: Positions once held, academic degrees earned, publications written, and awards received. They are irrelevant in México. No one cares about them. It’s liberating to leave my credentials behind, it’s like shucking off a shell and finding some new part of me hidden underneath.

For identity (besides a passport), I’ll take photos of my daughters, wife, granddaughter and the extended family. In my heart and soul, I’ll take with curiosity, humor, openness, compassion and, if possible, humility. That will be enough for any encounter.

After a decade of annual trips to México, I’ve learned the art of packing isn’t about what I put into the suitcase; the art comes from knowing what to leave out.

What’s in your suitcase? What are you leaving behind?