Have you ever wondered what catapults a people into greatness? How is it that a culture can survive for centuries long after the collapse of the kingdom that bred it? Wherever I go in Mexico, I see the remains of great city-state cultures that rose and dominated territories for centuries. In their time, they developed languages, forms of writing, literature, mathematics, mapped the heavens, created elaborate calendars, and developed food crops we can’t live without. Then the political orders collapsed, often abruptly, but their languages and cultures survived and continue to adapt to the present. What propelled their trajectories across the arc of history, like rocks launched from a catapult? What enables the cultures and languages bred in those civilizations to survive after the husk of empire falls away? Can such things happen to the United States?

I considered this question on President Obama’s last day in office; the day I arrived in Cuetzalan del Progreso, a Mexican town perched on a mountainside in Puebla’s Sierra Norte. Its residents speak Spanish and Nahuatl, and some speak Totonaco, two of Mexico’s 68 officially recognized languages that survived the collapse of their political cultures. The poems of Manuel Espinosa, a Totonaco poet who lives in Cuetzalan, bring into the 21st century the sensibility, spirituality, and identity of the Totonacos. Without its language, a culture dies.

My friend Lorena, once my Spanish conversation coach, lives in Cuetzalan and studies Nahuatl for her a master’s degree. We traveled together to El Taji­n, a ancestral cultural site of the contemporary Totonac and Huastec people. The road  to Papantla, a city on the Gulf Coast, was scarcely wider than the bus. It descended the altiplano’s escarpment by an organic route of broken asphalt and gravel, through jungle thickets, lime groves, and banana plantations. We rolled along a placid river rosy with the reflections of dawn .

El Tajin’s temples impress you with their massiveness but their origins remain somewhat obscure. Humans have occupied the place for nearly 7,000 years. During its apogee between 600 and 1200 A.D., Taji­n dominated much of Veracruz state from until its destruction in 1230. Walking in the tropical heat, among the silent, carefully set stones, I wondered what force of will or visionary leadership made the Totonacs, the Huastecs, the Olmecs, the Zapotecs great in their time and place. And why did their kingdoms fail? Was their greatness the work of a charismatic leader or the blossom of a widely shared vision? What makes America, or any nation, great, I wondered? 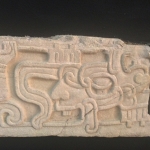 A glyph at El Tajin

We explored El Taji­n the day after the U.S. inaugurated a showman as President. He was an improbable candidate who rode into office demeaning Mexicans, promising to build a wall along the border, and break up NAFTA. What does it mean to ‘Make America Great Again?’ Does it mean anything? Or has a country already passed its apogee when the people want a leader who will remake their country as it was in a mythical golden age? That was my question for inauguration day 2017. The new President’s confusion of facts and lies pose a threat; he might destroy much without knowing it or, worse, without caring. Seeing Tajin’s great temples abandoned,  I worry  the barbarians are already at our gates.

Can any civilization survive its particular greatness? Is greatness sustainable? Do the concepts and values that bring a civilization into being contain a hidden seed of self-destruction? And where is that seed? Is it something small, unnoticed, or ignored until it sets in motion an irreversible  cascade of problems ? Does any nation or people escape this? Archeologists and historians are left to wonder: Where did things go wrong? And why?

Greatness. What is it? And how does it come about? Wandering among the stones, seeing the design, the care, the precision in construction; I’m impressed. Surely, such greatness must be the flower from a unifying vision of the people, a communal vision, the whole being the  fruit of many small things woven into daily life.

And what of American greatness? So many of our cultural norms rest on a belief in personal autonomy, an orderly and predictable society governed by laws and informed by science. We are optimists by nature; believers that tomorrow will inevitably be better than today, and upward progress is continuous. Unfortunately, the events of the last decade challenge this cultural idea. For many Americans, their todays are worse than their yesterdays and their tomorrows seem even bleaker. Those who felt forgotten or betrayed hitched their hopes, resentments, disappointments, and prejudices behind a campaign that promised to make America great once more.

Something similar happened in Minnesota on a smaller scale. Long a state with a progressive political and social culture, Minnesota burst into national consciousness in the mid-1970s with a Time Magazine cover story about ‘the good life’ in a state that ‘works.’ At the time, it was known for honest, collaborative politics, outstanding schools and colleges, numerous national corporations, engaged citizens, and an ethic of social responsibility. Unfortunately, Minnesotans have since taken their ‘goodness’ for granted, and the social compact has frayed to the point that the public prefers personal tax cuts to the cost of maintaining highways, schools, universities, and social services.

The decline of Minnesota’s ‘greatness’ and the collapse of Mexican civilizations reflect a loss of collective will and communal spirit in favor of a more individualistic, unequal, and antisocial attitude with widespread distrust of authority. Likewise, the social fabric of the United States is torn between narrow, competing visions of polity and the purpose of government. The culture has turned in on itself, consuming the good will that sustained diversity. Was this election a fundamental change in American civilization, or merely one episode among many? Sitting in the shade at El Tajin, I knew it was too early to know the answer. Nevertheless,  it was not too early to ask this question. Will our culture and its greatness survive?